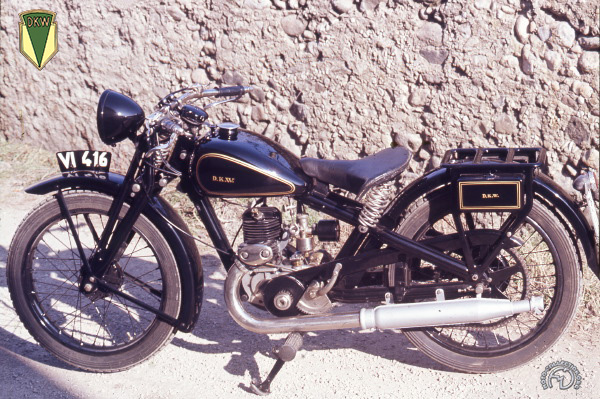 The two-stroke was extremely popular in Germany in the late 1920s. DKW, which by then had become the world's biggest motorcycle manufacturer, built 300 units a day, in addition to some 30 750 and 1000cc cyclecars. The factory also built a large number of small engines for the agricultural industry, all powered by two-stroke engines. DKW also supplied engines to other marques, though not to the same extent as the contemporary British manufacturers.

Motorcycles of less than 200cc were a privileged tax-exempt class in Germany. With its 175 and 200cc models, it was this category that was largely served by DKW during this period in time.

The unit-constructed 175cc engine fitted to the model illustrated was notable for its forced-air cooling by vanes on the flywheel magneto, which later doubled as a turbine. This simple and efficient solution was subsequently adopted by many manufacturers. In contrast, for the more up-market models in its range Â– 500 sports twin and 175cc with pumping piston Â– DKW used liquid cooling. Basically the same in concept as the normally-aspirated 175 touring model, the supercharged 175 was capable of exceeding 70 mph. In 1929, DKW abandoned its classic tubular frames and adopted pressed-steel construction, of which this 175 was one of the earliest examples.

A classic German motorcycle of its day, the popular little "Deek" 175 was built by the tens of thousands.