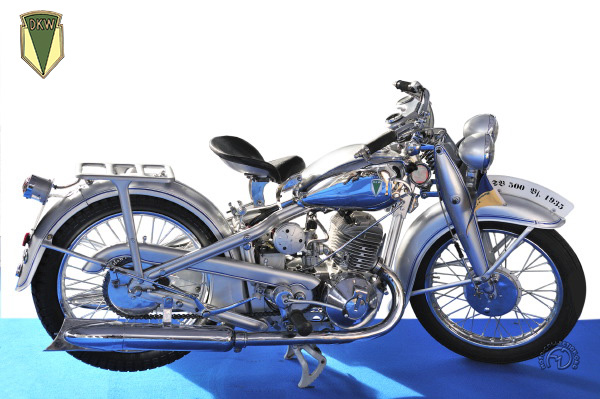 The unrivaled champion of the two-stroke engine since 1928, DKW offered a top-of-the-range 500 with a power unit of this type. In 1934, the SB succeeded the short-lived Block 500, of which 300 units were made in 1933. It shared the same basic principle of a modern, unit-construction engine with air-cooling. This simplification Â– compared with earlier water-cooled models Â– illustrated DKW's mastery over thermal expansion.

The adoption of SchnĂĽrle scavenging Â– and the consequent abandonment of the sensitive deflector pistons Â– was a far from negligible element in this important step forward.

The SB 500 was among one of the most advanced mounts of its day, particularly with its pedal selector gear shift. The Luxus model was distinguished from the base version by its comprehensive electric equipment Â– which included a dynastart and twin headlamps Â– as well as by its high level of finish. It weighed 33 lb more than the standard machine and was a first-rate roadster that was even rivaled by BMW and NSU. In all, 6300 SB 500s were built by 1936, when a new SB 500 with a longer frame and less-rounded tank replaced it. Around 13,300 examples of this second version were produced, proving that even in pre-WWII days, two-strokes could be taken seriously as top-quality machines. In 1939, the SB series was eventually replaced by the NZ, which was equipped with rear suspension.