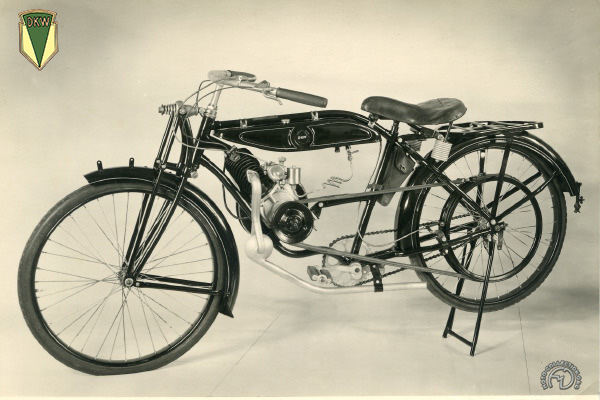 From steam to motorcycles

In 1916, JĂ¶rgen Skafte Rasmussen, a Danish-born maker of boiler fittings in Zschopau, Saxony (Germany), founded a company to make experiments with steam-powered automobiles. He called the firm "Dampf Kraft Wagen" ("steam-powered vehicles"). In 1918, the company was renamed, using the same initials, when it launched a toy engine designed by Hugo Ruppe under the name "Des Knaben Wunsch" ("the kid's wish").

In 1919, a third change of meaning for the initials came when DKW launched a little 120cc clip-on engine for pedal cycles and called it "Das Kleine Wunder" ("the small wonder"). It was aptly named, and 25,000 units were produced up until 1923. In 1921, DKW produced a curious little scooter with this engine, the Golem-Roller. It was not very successful, nor was a 148cc derivative Â– the Lomos Â– which was also built under license by Eichler of Berlin.

The first real DKW appeared in 1922, designed by Hermann Weber, who succeeded Ruppe as technical director. He held this post until 1945, when he and several of his team went to the USSR to relaunch motorcycle manufacturing. His "Reichsfahrtmodell" was sporty as well as a sales success (20,000 were built up to 1925) and took its name from its first brilliant victory, at the 1922 Reichsfahrt, against opposition from much more powerful machines.

Over the years, the RM underwent a number of changes, such as the switch from a leading-link fork to the pivoting girder pattern and the adoption of a band-operated clutch.