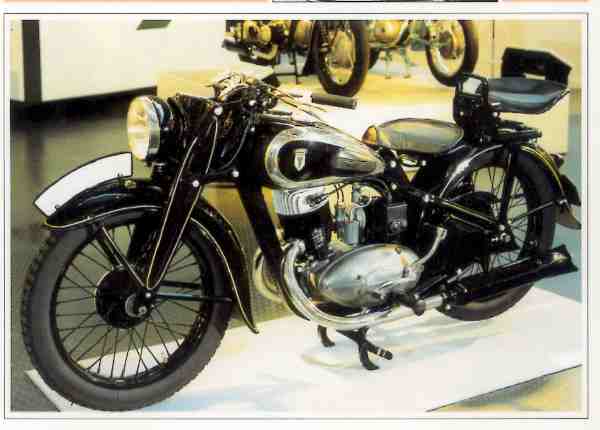 The last DKWs from Zschopau

The first " Z" DKWs Â– a 250 and a 350 Â– appeared in 1938, succeeding the SB series. At first sight, the principal technical innovation of these bikes lay in the transmission, which had four speeds instead of three and shifted by pedal rather than by hand.

In reality, these were completely new bikes, with different dimensions and with a primary transmission by chain rather than gearing. The attractive appearance of the engine-gearbox unit, with its egg-shaped, left-hand casing, remained a feature of the factory's products even after it had passed into Eastern Bloc ownership under the name "MZ".

The frame was also entirely redesigned and Â– off the record Â– was produced during the night because the factory's electric welding plant used too much current to be economical on daytime tariffs! Scarcely more powerful Â– but much heavier than the SB Â– the NZ marked a retrograde step in terms of performance, though it was more silent, more comfortable and more stable. Between 1938 and 1943, the range proved as successful as the SB; 45,300 NZ 350s rolled off the lines, along with 26,700 "250s". An Z 500 with rear suspension succeeded the SB 500 in 1939; a total of 4,600 units were built. The NZ 350-1 version, of which 12,000 examples were built in 1944, was exclusively for military use, and since light alloy was then rationed, its crankcase was cast from iron! That was the final DKW built at Zschopau.

The NZ 350 was, it seems, the first motorcycle to have the kickstart and selector pedals on the same shaft.