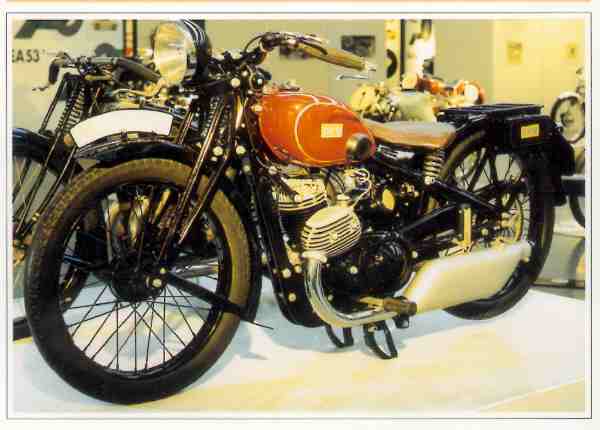 Launched on the crest of the wave

In 1928, DKW became the world's largest motorcycle maker (manufacturing 80,000 machines a year), and its range never ceased expanding. Thus, the Luxus 300 arrived in 1929 to succeed the E 300, sibling of the E 200 and 250 Â– the E 300 had little in common with its predecessor. It was noteworthy for its "natural cooling" (there was no forced draft), its fashionable saddle tank and its pressed-steel frame, which DKW believed was the key to building bikes in large numbers. On the other hand, it still had the large exhaust bulge on the left side of the cylinder.

Victim of the Crisis

This figure still seems modest compared with the 200 version (37,700 examples built up to 1932). Even so, it is accurate, particularly if you consider that a driver's license was needed to ride the 300 Â– unlike the 200 Â– and there was a more attractive 500 twin flagship model in the range. In 1930 and 1931, 3,000 sport derivatives of this machine were also built. They were more powerful (9 hp) and most importantly, equipped with a unit-constructed engine/gearbox unit that paved the way for the Block models. However, DKW production fell steadily after 1928, passing from 60,000 units in 1929 to 36,000 in 1930, less the fault of the marque than of the severe depression in Germany.

The Luxus range of 200 and 300cc machines was an instant success, despite the dramatic effects of the depression that hit Germany after 1929.