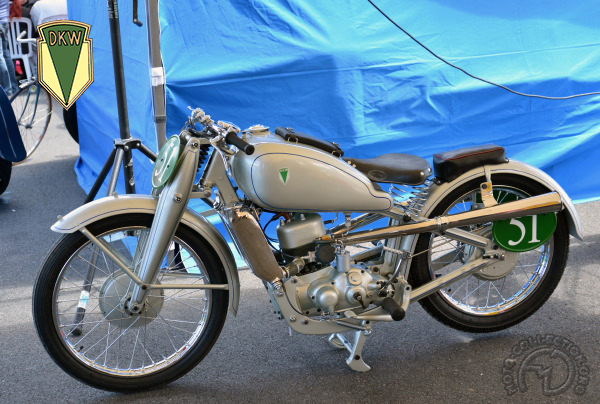 Racing for the Reich

The double-piston system Â– invented by Garelli Â– was improved by Puch in 1924. Puch adopted liquid cooling in 1927 and increased the engine capacity in 1928. DKW,

Germany's biggest manufacturer during WWI, had started racing in the mid-1920s with liquid-cooled 175 and 250cc machines equipped with deflector-top pistons. In 1931, it unveiled its first double-piston racer, which had liquid cooling and Â– as on the previous model Â– a separate compressor piston for the fuel/air mixture in the crankcase.

Though Puch halted development of its 250 in 1932, DKW carried on, innovating with the use of two automatic metallic intake valves, which enabled the engine to develop 24 hp.

First of the line

These works "Deeks" were always delicate, but Â– ridden by Walfried Winkler and Arthur Geiss Â– they nevertheless won the 250cc European championships in 1934 and 1935 and the Essen (Holland) and Ulster (Northern Ireland) GPs. Under pressure from the Nazis, manufacturers were "encouraged" to launch client competition machines, and the DKW 250 SS was, in 1935, the first machine of this type built in the Zschopau factory. It used the pressed-steel frame and forks of the road-going 250 SB. Its engine, with the pumping cylinder set at 90 degrees and surmounted by a radiator for the liquid cooling, was simpler than that of the racing version with automatic intake valves. The gearshift was by hand or foot control, and the SS was good for 20 hp and almost 90 mph, enough to guarantee it success in national racing.

Germany's first over-the-counter racer was as impressive as it was noisy, with its unmuffled twin tailpipes.