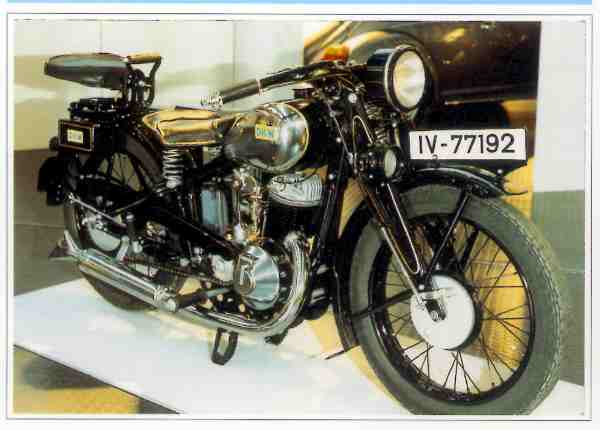 The Block 350, which followed the Luxus Sport 300 in 1931, might be regarded as an experimental model. It was introduced with a deflector-top piston. And, in 1932, it was endowed with a flat-top piston and SchnĂĽrle scavenging. The combination of these two techniques can be considered as one of the greatest steps in the history of the two-stroke.

Performance improved as a result of the lighter piston and the improved circulation of the air/gasoline mixture. However, it was the greater reliability resulting from a more stable relationship between the expansion rates of the piston and cylinder that caused the widespread adoption of this technique.

That was not the only way in which the Block 350 proved an innovator, since it was also fitted with automatic intake valves, a system that the Austrian firm of Titan had been investigating since the end of the 1920s. This proved temperamental to set up, but establishing an asymmetric timing pattern Â– which limited the back-flow of burnt gases into the incoming fuel/air mixture Â– resulted in a sharp increase in low-speed torque and lower fuel consumption. It is a technique that can be found on modern production and competition two-strokes. Though the valves were set at an angle on the Block, they were at right angles to the gas flow, which limited the power rating. Just 780 units were produced before the 350 Block was succeeded by the short-lived Sport 350, which introduced a four-speed gearbox and was then replaced by the SB.

Thee Block 350 was the first production two-stroke to be fitted with automatic intake valves, flat-top piston and SchnĂĽrle loop scavenging.