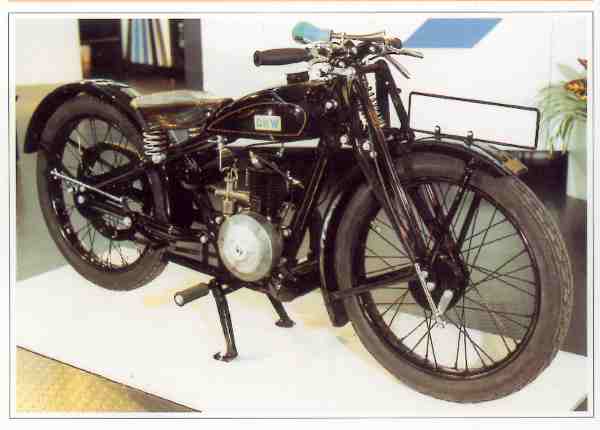 The Volksrad was derived from the E 206, launched in 1920. The 206cc single enjoyed phenomenal success, with some 49,000 units sold. Then, in 1928, Germany adopted a law favoring machines under 200cc in capacity Â– so DKW just reduced the bore by a millimeter, reducing the swept volume to a fraction under the limit, and 19,000 units of this hastily conceived E 200 model were produced before the ES 200 was launched.

The ES, also known as the "Volksrad" Â– "people's bike" Â– differed from the E range in its cost-cutting design. In 1929, the effects of the Depression were already being felt in Germany, and DKW felt that what the market needed was not just a more diversified range but a really low-priced "entry model".

So the Volksrad had no gearbox or kick-starter, a single brake shoe on the belt rim (at least on the first models), a simplified carburettor and no luggage grid. At 420 marks, it was by far the least expensive 200 on the market. Some idea of the cost-cutting that had gone into the Volksrad can be obtained by comparing it with the rest of the range Â– the two-speed Z cost 485 marks and the Block was 895 marks. However, scarcely 3000 Volksrads were built in 1929 and 1930, proving that even though the market was depressed, the public wanted something better than a rock-bottom specification. At the same time, DKW sold over 20,000 of the chain-driven Luxus 200, which cost more than 600 marks.

Developed to counter the Great Depression, the Volksrad ES 200 did not meet with its anticipated success, for the more expensive models sold better than this "people's bike".