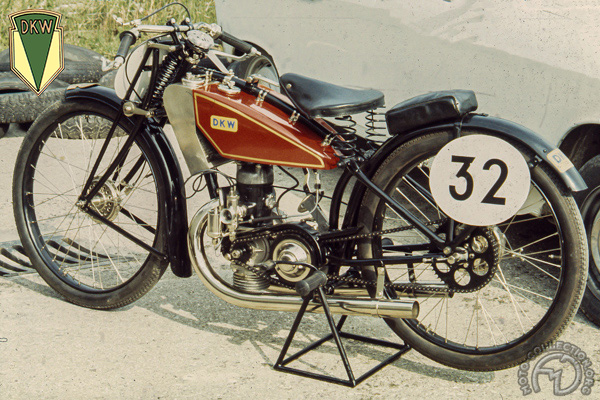 The DKW works at Zschopau announced early on that it had serious sports ambitions. Known for its production two-strokes, DKW built a special water-cooled racing version. A major step forward was made in 1926, with the adoption of a second, short-stroke piston working in an air-cooled cylinder ("Ladepumpe") mounted beneath the engine to compress the incoming charge in the crankcase.

Sensation on the Track

This first real racing DKW, the 175cc ARe, caused a sensation in 1926 on the Berlin Avus circuit by beating the hour world record in its class at an average of 66 mph.

In 1927, it inaugurated the new NĂĽrburgring circuit, where the German rider Henkelmann won the 175cc class and so became Champion of Europe. The DKW ARe was quickly joined by a 250cc version, the ORe. The two models were sold to hand-picked riders but enjoyed their greatest successes in the hands of the works riders Â– Arthur Geiss, Arthur Muller, Walfried Winkler and Xavier Gmelch. In 1927 and 1928, Winkler was the German 250cc Champion, while Geiss took the 175cc title in 1928 and the 250 title in 1930 and 1931. Their final year as works racers was 1932, since in 1931 a new DKW racer, the URe "split-single", had appeared, with two carburetors and automatic intake valves, which developed a claimed 20 hp but without the same reliability as the ARe and ORe with single pistons.

The DKW ARe and ORe were unbeatable in their day thanks to the unique precompression system using a pumping cylinder beneath the crankcase.