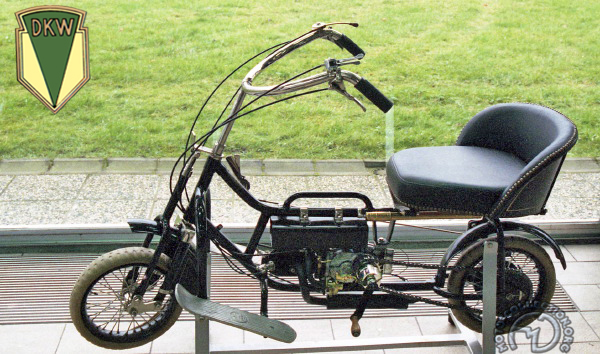 First came an 18cc toy engine sold as "Das Knaben Wunsch" ("every boy's wish") followed by "Das Kleine Wunder" ("the small wonder") an auxiliary bicycle motor, launched at the 1919 Leipzig Fair. Rasmussen had first used the DKW initials on a steam car Â–, "Dampf-Kraft Wagen" Â– that he had built during WWI.

In 1921, DKW offered completed powered bicycles and also fined the same engine in the Golem "armchair bicycle", a combination of a motorbike and a scooter. The frame was quite basic: two parallel swan-neck tubes linked the steering head with a double fork carrying the rear wheel and leading-link front suspension was fined. The engine was mounted between these tubes and between the rider's legs. Seated comfortably in an upholstered bucket seat mounted on tiny leaf springs, the rider originally had two high-set footrests, soon replaced by proper footboards. In 1922, the Golem was replaced by the more refined Lomas Sesselrad, a genuine first-generation scooter that used the front fork of the Golem in conjunction with a very advanced swing arm rear suspension that would not have looked out of place 40 years later. DKW's next venture into scooters did not come until 1954, with the Hobby, which, like its ancestors, had small-diameter spoked wheels. DKW was one of the very few marques to have experienced the two ages of the scooter.

With its comfortable front suspension and sprung armchair seat, the Golem was intended as "the busy man's motorcycle".