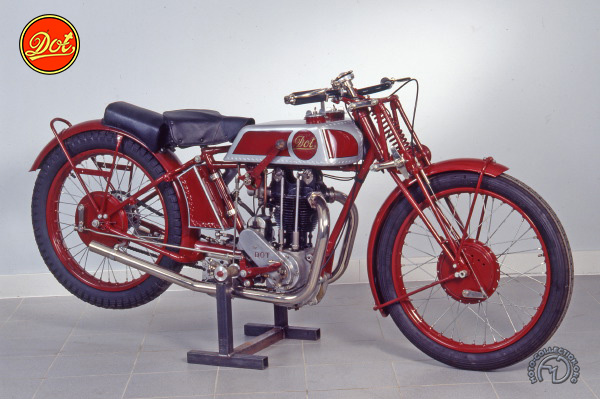 The name "Dot" was originally adopted in honor of a young lady named Dorothy. By the 1920s the marque was declaring that "DOT" stood for "Devoid of Trouble". Founded in 1903 by former racing cyclist Harry Reed, the company was little known until 1908, when Reed, riding a 680cc Dot powered by a 5hp Peugeot V-twin, won the Senior TT with just a spoonful of fuel left in his tank.

Racing Dots achieved many victories on the Brooklands circuit, first with Peugeot V-twin power, and subsequently with JAP engines. By 1923, Dot was offering an entirely JAP-powered range Â– 300 and 350cc singles and a 1000cc V-twin Â– then in mid-season added an oil-cooled 350cc Bradshaw engine to the line-up. Dot became the biggest customer for the "oil-boiler" Bradshaw, which remained in its catalogue until 1928.

Harry Reed, having reached the age of 50, sold his company in 1926 to new owners and retired. The marque withdrew from racing and built only 350s Â– side-valve and overhead-valve JAPs and the unorthodox Bradshaw. Nevertheless, Dot was back in the TI in 1927 and 1928 with the brothers Ken and Eddie Twemlow, who finished second and third in the 1928 Lightweight. Eddie also came in third in the Junior, with a machine identical to that shown, one of only two built. Dot tried again in 1929, with a Guzzi-like horizontal JAP-engined single in a double-cradle frame, but without success.

This delightful Dot is one of just two 350s built for the 1928 junior TT, the marque's last successful entry in an event in which it had made its name 20 years earlier.