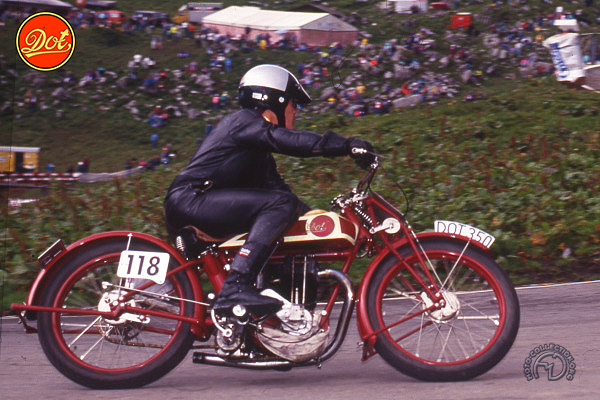 Harry Reed, who founded Dot in 1903, was crazy about racing and participated regularly in the Isle of Man Tourist Trophy. In 1908, he won the twin-cylinder category of the TT with a 680cc Peugeot-engined machine he had built himself. Then, in 1924, at the age of 49, he came in second place in the sidecar category, ahead of all the 600cc bikes, with an outfit powered by an "oil-boiler" Bradshaw engine of just 350cc.

Reed stopped racing after 1924 but continued to enter specially-prepared Dot sports bikes in the Tourist Trophy. The Dot marque's slogan was "Devoid of Trouble," and these racers were powered by the reliable JAP engines. In 1927, a bike similar to the one pictured finished ninth in the Junior (350cc) TT.

That year, JAP had built a new 350cc engine for the Tourist Trophy with valves actuated by vertical pushrods and rockers. In the Dot installation, the magneto was mounted behind the cylinder and driven by chain. The JAP oil pump was mounted on the crankcase, with a visible flow indicator, and a separate Sturmey Archer three-speed gearbox was fitted. The same engine was fitted to the HRD with which Fred Dixon won the 1927 TT at an average of 67 mph. Riding a Dot, Wal Phillips was clocked at 82 mph on the Brooklands track. The manufacture of Dot bikes ended in 1932, but the company was revived after WWII and built Villiers-engined machines until1977.

Still racing after more than 60 years! This Dot 350 Sports (owned by Berthold Waller) is shown in the Klausen Pass retrospective bill-climb in Switzerland in August 1993.