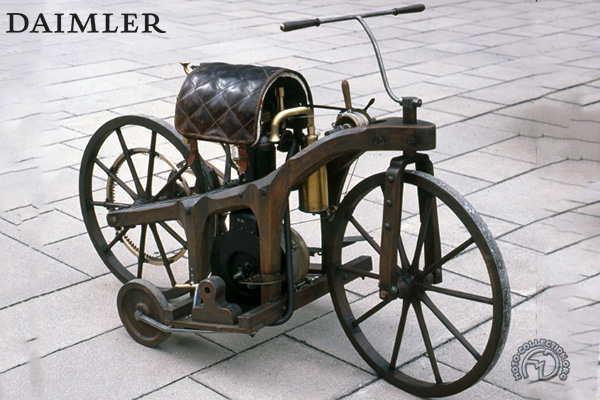 For engine test only

The invention of the pedal-driven velocipede in the mid-19th century inspired the concept of a motorized two-wheeler, but though Michaux in France and Roper in the United States experimented with steam-powered velocipedes, the idea failed to catch on.

But when Gottlieb Daimler built his first internal combustion engine in the 1880s, he wanted a testing ground to prove the potential of his "universal power source." An engine of just 264 cc was fitted into a crude bicycle made of wood; the machine had outrigged steady wheels and was christened "Einspur" ("single track").

It used petroleum for fuel and an ignition system in which a hollow tube projecting into the cylinder was heated by a Bunsen burner: the compressed gas/air mixture was forced into the tube on the compression stroke and exploded. Having proved his engine on the crude Einspur, Gottlieb Daimler moved on to horseless carriages that his engineer Wilhelm Maybach ultimately developed into the first Mercedes in 1901, shortly after Daimler's death. Although the Einspur was really the grandfather of the Mercedes, it was also the first gasoline-powered motorcycle.

.Daimler's original prototype was destroyed in a fire that burned down the company's factory in 1903; this is one of a number of replicas exhibited in German museums.