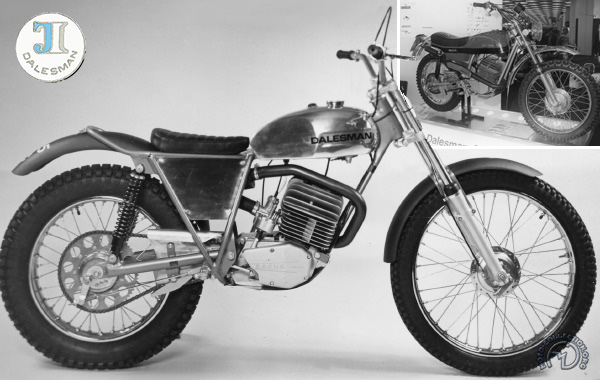 The British motorcycle industry was in a deep crisis during the 1970s. Not only were great companies like BSA struggling to carry on with a handful of models in production, but also others, like Matchless, Ariel and Royal Enfield, had vanished one by one. But a country with motorcycling in its blood doesn't give up that easily. Many small manufacturers took up the challenge, concentrating on tightly-defined niche sectors. Among them was Dalesman.

This firm from Yorkshire first saw the light of day in 1969, thanks to American capital. Motorcycling was booming in the US at that time, yet there were still many sectors where the Japanese were poorly represented and there were places remaining at the table.

Only the Best Was Good Enough

That's why right from the start Dalesman specialized in trials, enduro and motocross models, initially using Puch 100 to 125cc engines. Their design was orthodox and the finish was impeccable: The frame was made in Reynolds 531 chrome-molybdenum alloy, the ultimate steel tubing. The model illustrated is the Trials version of 1974 equipped with a German Sachs engine, which the company was fitting concurrently with the Puch. Maybe the Dalesman lacked sufficient personality, but the marque died young, unable to withstand the onslaught from the Spanish, Austrian and Â– above all Â– Japanese makers.

The Dalesman was beautifully finished, with a double-cradle frame in Reynolds 531 tubing, but it lacked the personality to survive against fierce competition.