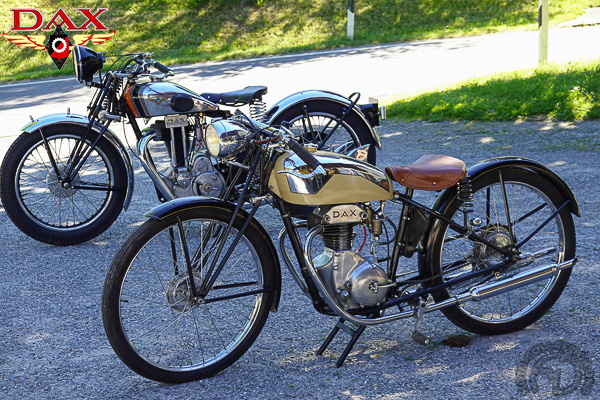 In France in the Thirties, pedal-assisted cyclemotors with 100cc engines, a maximum weight of 30 kg (66 lbs.), and a top speed of 30 km/h (18.6 mph) could be ridden without a drivers license . The game for all the motorcycle manufacturers was to see how much they could get away with legally in producing 100cc machines.

The jewel-like Dax was built right on the limits of legality to take advantage of every tax and insurance concession available to cycles while still offering the advantages of a "real" motorcycle. The 100cc "Baby" was a scaled-down replica of the highly-desirable "Rafale," built by the Clichy company. Dax's Baby used the most advanced techniques of the period.

The all-alloy four-stroke engine had a twin-port overhead-valve cylinder head and was listed with a two-speed gearbox to conform with the legal weight limit. However, most customers opted for the alternative three-speed transmission! Also for legal reasons, the Baby was equipped with pedals, which were actually almost useless because they could be bolted on to act as immobile footrests. Impeccably finished and offering 50mph performance, the Baby seemed to hold all the cards. But it was impossibly expensive, costing the equivalent of over $400 while a conventional cyclemotor cost $270, and a 250cc "real" bike only $630. Only 100 Babies were sold.

Intended as tbe Rolls-Royce of cyclemotors, the Baby was, according to its catalog, "not a mass-produced machine but built lo the taste of each individual customerÂ”.