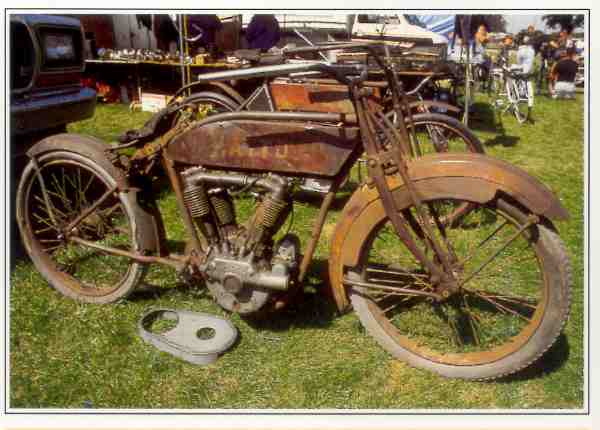 In the long history of the US motorcycle industry, the predominant engine type has been the big V-twin. And two almost forgotten makes that were famous users of V-twins in their day were Dayton and De Luxe, which shared a common power unit.

Built between 1911 and 1917 by the Huffman Manufacturing Company of Elkhart, Indiana, the Dayton was powered by Spacke V-twins of 7, 9 and 10 hp. The F.W. Spacke Machine Company sold complete machines Ā– singles of 550cc and V- twins of 980cc Ā– under the "De Luxe" label from 1912 to 1915, when they were absorbed into the empire of one of the great names in the history of the US motorcycle industry Ā– Ignaz Schwinn, creator of the Excelsior Cycle Company.

The Dayton and De Luxe machines were virtually indistinguishable, particularly since Spacke cast both names into the crankcases of his engines as an economy measure. Those big V-twins were typical of the technology of the day, with overhead inlet and side exhaust valves. They were often seen in competition: A Dayton successfully participated in a 300-mile race organized in 1915 at Venice, California. Inspired by the famed Vanderbilt Cup for cars, this race made history by using a tarred track linked to the banked mile circuit; 12,000 spectators flocked to see the racing between marques such as Indian, Harley, Cyclone, Thor, Pope, Excelsior and Dayton at speeds of 60 mph and more. De Luxe bikes with the same engines took part in a 24-hour record attempt at Indianapolis.

This wonderfully-original Dayton-De Luxe seen at an American motorcycle meet is a real firebreathing monster from the early days.