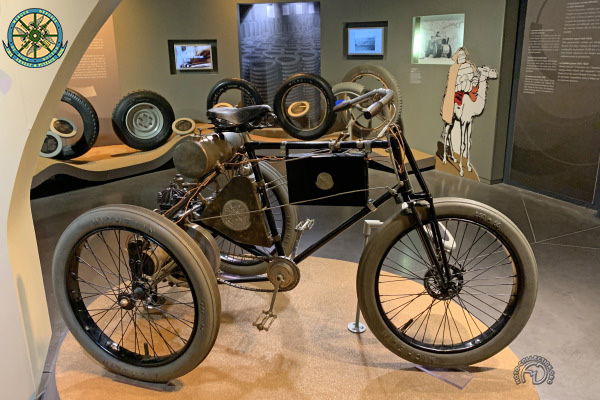 Father of them all

"What an embryo the automobile would still be if the De Dion-Bouton Tricycle had never been born!" claimed a turn-of-the-century ad. "At this date Â– June 15, 1899 Â– sales total 21,800 units." And certainly the high-speed engine invented in 1894 was a major factor in the development of the French car and motorcycle industry. Many of the pioneer makers in Europe and America bought (or copied) De Dion-Bouton engines rather than developing their own power units.

Both Sides of the Atlantic

Choice of the Famous

The De Dion-Bouton tricycle was the car of its day, which lasted scarcely ten years: by 1905 the tricycle had been eclipsed by the reliable and rapid motorcycle. Many famous motorists were riders of De Dion-Bouton tricycles, among them the Hon. C.S. Rolls (later of Rolls-Royce). The De Dion-Bouton company was an odd partnership between a sturdy aristocrat, politician, lover and duelist, Count Albert De Dion, and a tiny engineering genius named Georges Bouton. In the 1880s they had built steam carriages and sold them to a few adventurous souls Â– but it was their petrol-engined cycles and cars that brought them lasting fame.

Suspension: none (except the air in the tires!)

"To go fast, it 's better to be light than powerful," said an 1899 treatise on the De Dion-Bouton tricycle Â– and in its day, the De Dion was the fastest vehicle on the road!