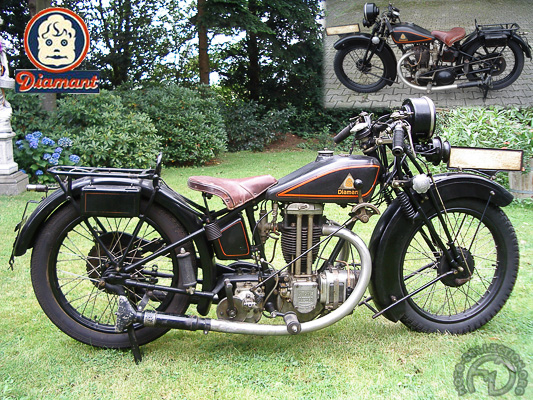 The convoluted history of the Diamant ("Diamond") marque began in 1903, with the production of lightweight bikes with single-cylinder and V-twin engines. In 1905, Tri-cars appeared with the space between the front wheels occupied by an armchair for the passenger. Motorcycle construction halted in 1908 and was not resumed until 1926.

Shortly after WWI, Franz Gn√§dig created ¬ñ with the Krieger brothers ¬ñ the KG 500 shaft-driven, overhead-valve single. After Cito (the maker of the KG) was taken over by Allright, Gn√§dig found himself on his own in Berlin, where in 1925, he created an ohv 350cc, which Diamant built in its factory at Sigmar-Schonau. Gn√§dig was appointed director of the firm in 1927. The engine was made by K√ºhne of Dresden, who also built the overhead-valve 500cc engine that was fitted in Diamant machines. British-built JAP engines were another option for Diamant.

After a merger with Elite, Diamant was then acquired by the car maker Opel in 1928. Until 1930, Diamant built the 500 Motoclub ¬ñ with a highly-original duralumin frame, built under license from Neumann-Neander ¬ñ for the R√ºsselsheim giant, which had become part of General Motors in early 1929. In 1931, Diamant produced the prototype of the "EO" ("Elite-Opel") 350 and 500 range, with three overhead-valves per cylinder and the Neander name, which was designed by Richard K√ºchen. Between 1933 and the outbreak of WWII, the works made Fichtel-Sachs-engined autocycles of 75 and 98cc.

Designed by engineer Franz Gn√§dig, this 350 was the best Diamant model to be built before the company was acquired by Opel.