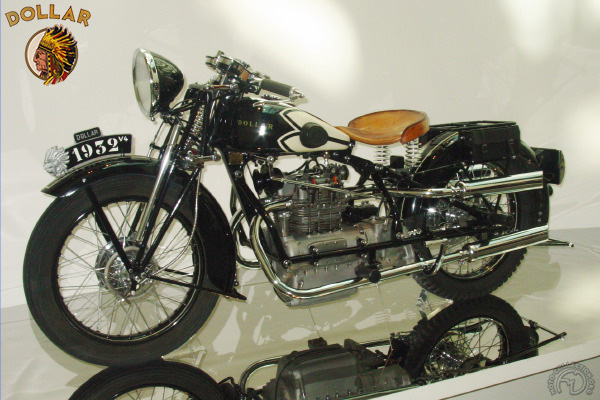 Debuting in 1924, the Dollar motorcycle quickly gained popularity in France and was produced all on its own for about four years. At the beginning of the Thirties, however, Dollar forged a partnership with Chaise and proceeded to produce four-cylinder bikes that captured prestige when presented at shows.

The original concept for the new Dollar/Chaise motors was an improvement on what else was available at the time. The V-shaped configuration allowed for a more compact disposition of the engine in the frame and improved cooling. Conceived for multiple applications, the motor was subsequently refined until it became more clearly a motor for motorcycles. An evolved version, complete with a redesigned carburetor, was shown at a salon in 1932.

The Dollar V4 that appeared in the firm's catalogue during the mid-Thirties, was copied by several other makers. Another Parisian company, Majestic, employed a similar mechanical design, and the Italians also borrowed from the French in the layout of some of their bikes. In some cases, the Dollar V4 motor managed to find its way into airplane manufacture, showing both its flexibility and the quality of its development.

Some bikes are influential, and some actually change the face of design. The Dollar V4, with its much-imitated engine layout, set trends in the Thirties.