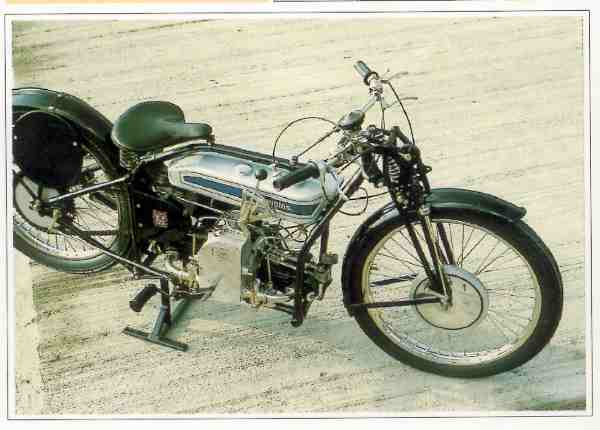 A long-term devotee of the longitudinal flat-twin engine, Douglas gained its first major sports honors in 1912, winning the Junior Isle of Man Tourist Trophy. But its finest hour came in 1923, with firsts for the RA model in the 500cc Senior and 600cc Sidecar TT.

Douglas built its first overhead-valve engine in 1913, but it only appeared late in the season and was scarcely seen in 1914. In 1921, the valve-in-head layout became a commercial reality with the launch of two ohv models, a 350 and a 600. Douglas was soon using them to set world speed records by the dozen, unquestionably the finest being the half-mile record made by Cyril Pullin in 1922 on a 500 at 100 mph.

For 1923, Douglas developed the 500 RA, with twin carburetors controlled by twist-grip and the engine set low in the double-cradle frame, thanks to the mounting of the gearbox over the rear cylinder. The braking was innovative. It was the first application of disc brakes to a two-wheeler, with V-shaped fiber shoes pressing on the rim of the discs. Tom Sheard won the 1923 Senior TT, while Jim Whalley set a new lap record. Finally, six out of the nine RA Douglases entered in the Senior TT were placed. In the first-ever Sidecar TT, Freddie Dixon and Walter Denny were also victorious, giving Douglas the first double win in the history of the TT. From 1924 through 1926, the RA was catalogued as the TT Replica over-the-counter racer in 500 and 600cc forms, but with drum braking.

Long and low, the RA Douglas was one of the finest sporting bikes of the early 1920s, particularly in the bands of such riders as "Fiery Fred" Dixon.