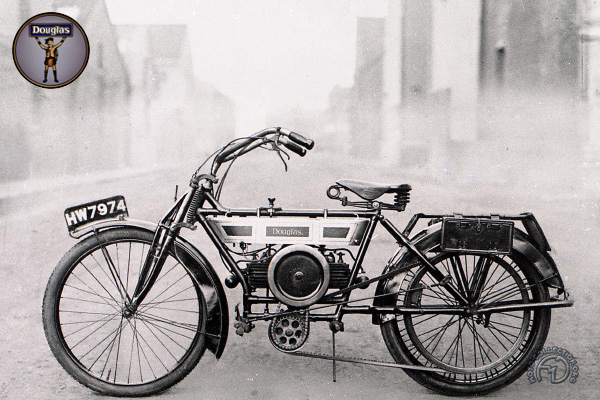 From shoes to motorcycles

Douglas of Bristol was the first marque to successfully market a motorcycle powered by a longitudinal flat-twin engine. The first model was launched in 1907 with an engine devised by Joseph Barter, who, two years earlier, had founded his own company, Light Motors Ltd., to build a 200cc flat-twin he had designed, named the Fairy. He hit financial problems and sold his services and his design to Douglas, whose main activity was shoemaking.

From End to End of Britain

Barter increased the displacement to 340cc and installed the engine in an improved frame with a longer wheelbase. This 1909 model had its engine mounted high in the frame with a chain-driven two-speed gearbox underneath, driving the rear wheel by belt. It was reliable and well-designed. Douglas gained valuable publicity in 1910, when Eli Clark set a new lightweight class record of 39 hr 40 min for the 900-mile Land's End, John o' Groat's "end-to-end" ride with a single-speed 2.75 hp Douglas.

An improved version of the Douglas, with the engine mounted lower in the frame and the gearbox beneath the rear cylinder, became the most popular military motorcycle of WWI. Over 25,000 were delivered, not only to the British Army but also to the armies of France, Belgium and Italy. After WWII, the Douglas engine inspired the BMW engine. Among the many satisfied owners of the Douglas flat-twin was the Duke of York Â– the future King George VI of England, who regularly used his Douglas while he was a student and later entered his personal chauffeur and Douglas in races at Brooklands.

With its flat-twin engine and distinctively large external flywheel, the Douglas was one of the most successful machines of the pioneer era.