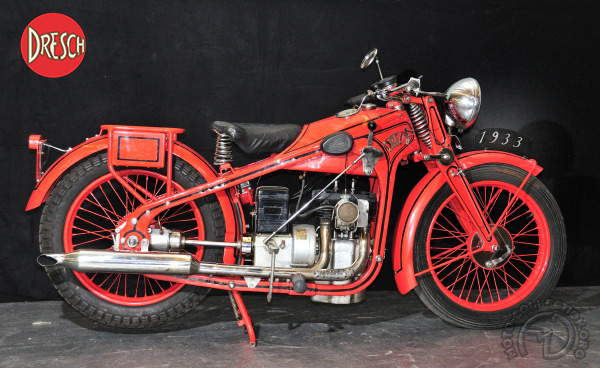 The motorcycle for the masses

According to comments attributed to the French builder Henri Dresch, the motorcycle "is a useful, reliable means of transport, very different from these sporty toys... It isn't a luxury item for the idle rich, but is essentially democraticÂ”. He said that before the outbreak of World War II.

Motorcycles for the Masses

Chasing these admirable principles, Dresch created his own marque in 1928, dedicated to motorcycles for the masses, with low prices achieved through large-scale production. They were an instant success, and the company enjoyed great popularity until 1940. But war came, and the last 500cc Dresch bikes left the factory painted khaki and fitted with armor-plating!

With the launch of its 500 twin at the 1930 Paris Salon, supported by 250cc and 350cc singles, Dresch was already into its third generation of designs; pressed-steel frames were standardized across the range and quickly became highly coveted. Unit-constructed engines and gearboxes drove the rear wheel by shaft. The 500 had two cylinders in line, and the first models had side-valves, with an overhead-valve sport version appearing two years later (sales were conservative). Selling for the equivalent of $1,040 (including insurance!), the 500 Dresch twin was cheaper than many single-cylinder machines. And it didn't skimp on equipment! R had leaf-spring handlebars, electric lighting, a horn, a my-counter, an 8-day clock, and an ammeter on an instrument panel set into the top of the tank.

Available in red lined in black or midnight blue lined in white, the Dresch 500 was originally equipped with a splendid fishtail exhaust.