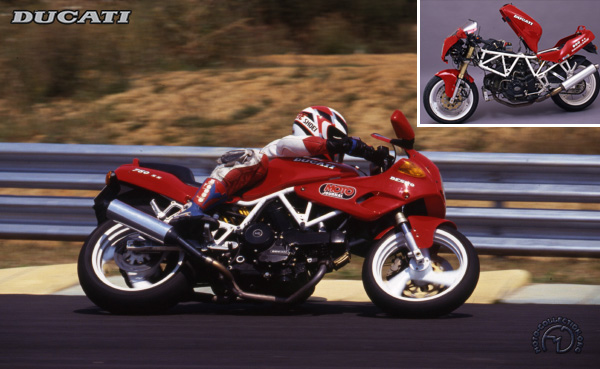 Ducati earned a solid reputation as a maker of top-rank sports- bikes with its 750 S.S, which first appeared in 1972, At the time it was tegarded as a true-blue motorcycle, exclusive .down to tbe last.detail. Dropped in the mid 80'this famous line reappeared in 1989, and was .extensively remodeled in 1991, to the great joy of fans of genuine Italian sports bikes.

With slightly "softer" lines, the new SS models retained the aggressive character of true sports machinery. Exernallly similar, the 750 and 900 SS in fact differed in many respects. The engine of the 750 is derived from that of the. 600 Pantah, while the 900 is a detuned version of the 851, with which it shares its air/oil-cooling and six-speed transmission. The 900 also inherited more sophisticated suspension units and twin front disk brakes. In l992, both models were offered with either full or handlebar fairings.

Civilized, but Not Tamed

The SS Ducatis have been civilized without losing their character. They are capable of taking a passenger, and their engines, with carburetor induction, are more flexible than ever. But it's on twisting toads that they reveal their true selves, bikes with plenty of torque that are astounding, providing really enjoyable sports motorcycling Jtalian style.

Not quite the identical twins they first seem: the. 900 SS and the. 750 SS, here shown in action with its full fairing.