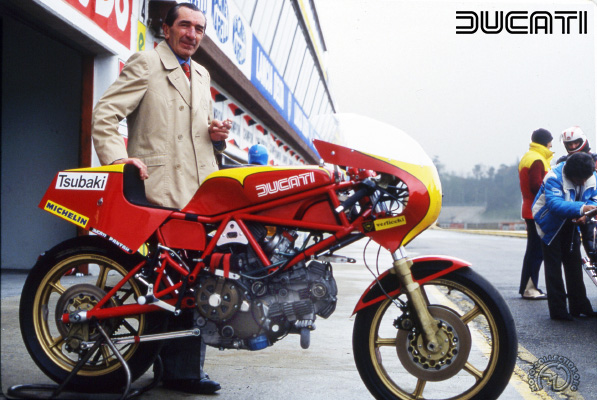 "Famed for its V-engined Super Sport bikes, Ducati set a new standard in 1980 with the introduction of the Pantah. The bike had a new and very compact engine of thoroughly modern design that - unusual for a motorcycle - sported single overhead camshafts driven by cogged belts.

Within a year, Ducati had evolved this aggressive racing version of the Pantah, which Tony Rutter rode to a world championship in the U 2 category. It was produced till 1985. The frame was an unorthodox trellis girder made up of small-diameter tubes, from which the engine was suspended. The cantilever rear suspension was equally unorthodox, with a single shock absorber mounted beneath the tank. The mechanical components had also been redesigned: the camshaft belts were now exposed, there were bigger carburetors, and a dry-plate clutch was housed in a magnesium casing.

Thanks to front fork sheaths and spoked wheels made from the same ultra-light material, the U 2 tipped the scales at a mere287 lb. and had a very favorable power/weight ratio compared with its Japanese rivals. Derivatives of the Pantah have continued to enjoy racing success, culminating in victory in the world Superbike championship for the Frenchman Raymond Roche.

The advanced design of the 1981 Pantah laid the foundations for the Ducatis of the Nineties and later.Â”