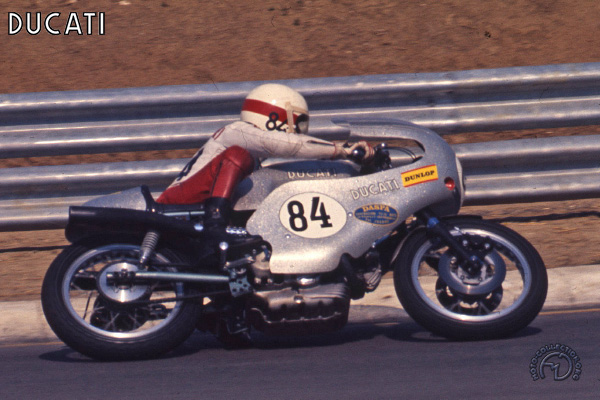 Return to the racetrack

The Ducati 851S, which took the World Superbike Championship in 1991, with its eight-valve V-twin engine, fuel injection and liquid cooling, was a jab at the Japanese industry. It had admittedly been modernized; its basic design dated back to 1972.

Ducati had then just brought out its 750 V-twin and decided to return to racing with an entry in the richest competition in the world, the Imola 200. Fabio Taglioni, the engineer who headed Ducati's technical department for almost 30 years, turned the 750 into a racer by fitting it with the desmodromic valve gear that he had first fitted to the marque's 125cc Grand Prix racers in 1954. Desmodromic valves, positively closed by special cams, are complex and have been largely displaced thanks to the excellence of modern valve springs Ā– but they are part of the special image of Ducati, who knew how to get the best out of them.

The 750 racer of 1972 revved easily to 11,000 rpm, developed 90 hp at 3500 rpm and Ā– importantly Ā– weighed just 392 lb and had a low fuel consumption. At Imola, works riders Paul Smart and Bruno Spaggiari, finished first and second. Ducati improved its SS still further for 1973, shed over 48 lb (mostly from the frame), revised the bore and stroke from 80x74mm to 86x64mm, and fitted an oil radiator in the nose of the fairing. Flying Finn Jarno Saarinen dominated the race with his little Yamaha 350, but Spaggiari was again second with his privateer SS, of which just 200 were made.

In 1973 veteran racer Bruno Spaggiari finished second in the Imola 200-mile race on his Ducati at the age of 42.