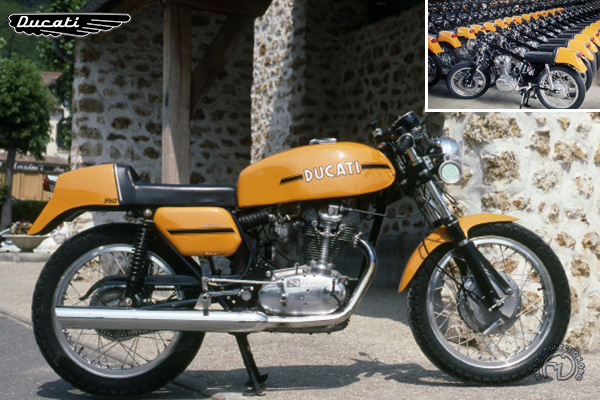 Ducati was a major electrical manufacturing company that diversified into two-wheelers via the "Cucciolo" ("Little Pup") 50cc clip-on power unit for pedal cycles immediately after WWII. The first complete Ducati motorcycle was launched in 1950.

The head of the new venture, Giuseppe Montano, realized that the best way of promoting the Ducati name was to enter races Â– and win them! In 1954, Montano recruited an outstanding engineer named Fabio Taglioni as chief designer. He began with the overhead-camshaft 98cc "Marianna" Gran Sport, a high-performance, easy-to-maintain, over-the-counter racer that sold 350 units.

Taglioni developed a desmodromic cylinder head to prevent the valves from hitting the piston at high revolutions. The cams closed the valves as well as opened them. This enabled the engine to rev as high as 14,000 rpm. The new design made its debut in the 1956 Swedish Grand Prix, where works rider Degli Antoni won the 125cc race. The Ducati racers shattered the domination of MV in 125cc racing. In the 1958 Italian GP, Ducatis took the first five places and only one MV finished. At the end of 1968, desmo engines became available in road-going Ducatis in 250, 350 and 450cc capacities. The roadsters had a single camshaft carrying the opening and closing cams to cut production costs.

The Ducati Desmo was very popular, as the inset 19 74 photo of factory stocks awaiting delivery shows, but production ended in 1975.