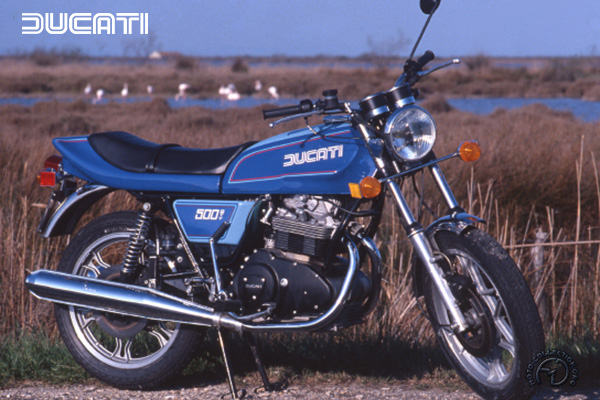 Ducati's enviable reputation is based on its singles, its V-twins, and Â– above all Â– on its desmodromic valve gear, which positively opens and closes the valves. Nevertheless, the marque has attempted to branch out in different directions, as it did with the four-cylinder Apollo and with two-stroke singles.

In 1965, Ducati built an advanced 500cc vertical twin with 180-degree firing intervals (later popularized by Honda). Highly over-square at 74x58mm, with two 27mm carburetors, five speeds and a power output of 40 hp at 6000 rpm, it never made production. Later, however, the idea began to gel with the even more over-square (78x52mm) 500 GTL.

Starting All Over Again

In 1976, Ducati once more dusted off the project, replaced the simple-cradle frame with a double-cradle construction, fitted-alloy wheels and three disc brakes and modernized the styling. The GTL became the GTV, and there was even a Desmo version that developed over 12 hp more. The specification was also upgraded, with Japanese-style instrumentation, storage lockers and finish. But despite all these efforts, the vertical-twin Ducatis were a resounding flop. Too costly and incapable of competing with the more sophisticated Japanese bikes, they had lost the distinctive personality of the marque. Ducati did a smart about-face and, in 1977, launched its first Pantah 500 V-twin, starting a line that would culminate fifteen years later in the World Championship-winning Ducati.

Despite their advanced specification, the GTV and Desmo Sport shown were disappointing to customers and were soon withdrawn.