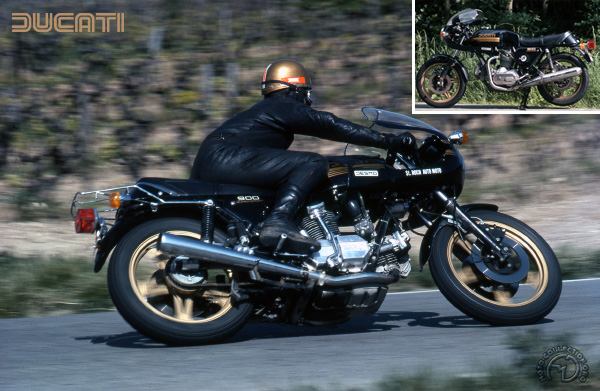 For a full ten years, the 900 SS Ducati represented the archetypal sporting bike, the favorite mount of the purists to whom character is everything. The uncompromising Ducati was ill-suited to town riding, was notoriously uncomfortable two-up, lacked an electric starter, and its detail finish was sometimes questionable.

Quicker Round the Bends

Slower in a straight line than its more powerful contemporary four-cylinder competitors from Japan, the Ducati 900 SS could nevertheless see them off with ease on its home ground of race circuits and winding back roads. The sinuous Ducati was also almost 100 lbs. lighter than the big fours, which scaled at least 550 lbs. dry. Endowed with exceptional road-holding on well-surfaced highways the Ducati was only let down by its unyielding suspension. But its extraordinary V-twin engine torque and thoroughbred nature were a revelation.

Ducati built its first V-twin Â– a 750 on very similar lines to the 900 SS launched in 1976 Â– in 1971. A restyled 900 appeared in 1983, but it was only in 1990 that the resurgent Ducati works brought out an all-new V-twin to succeed the legendary 900 SS (whose designation it retained). The distinguishing feature of the 900 SS was its desmodromic valve gear in which the two valves in each cylinder were positively opened and closed by separate rockers to avoid valve bounce at high engine speeds.

The typical image of the Seventies Â– a rider in black leather on his Ducati 900 SS Desmo.