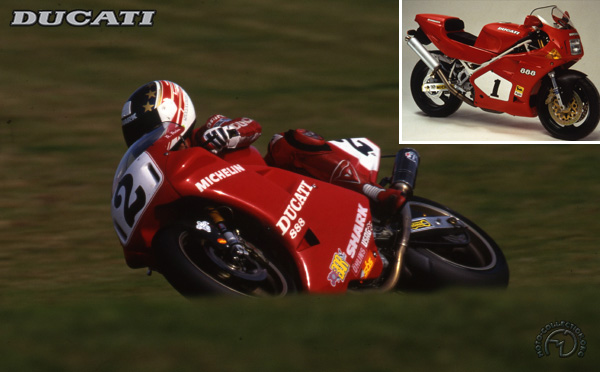 "When the Cagiva conglomerate took over Ducati, dedicated Ducatisti feared that the marque would fade away. Little did they know that Cagiva would bring to market new Ducati models that embodied bold technology and styling. In 1988, the 851 Strada appeared as a competition model only in the U.S. The new twins proved that Ducati was back!

A Place to Race

Some experienced tuners found the complications imposed by the electronic fuel injection and the mechanical complexity of the valve train to be more than they could handle. Eraldo Ferracci and the Fast By Ferracci team quickly adapted and soon established their 851 as the one to beat in the AMA Battle of the Twins. World and AMA Superbike competition were dominated by the multi- cylinder Japanese manufacturers but rules were adopted that gave the twins a displacement and weight advantage.

Although Ducati fields a "factory" team in World Superbike, Fast By Ferracci quickly established their supremacy in the 1991 series with Doug Polen riding. The FBF team, which enjoys a friendly relationship with the factory, literally dominated the field. Even a casual examination of the machine reveals the effort that must be put into making a world class racer. Meticulous preparation is in evidence throughout. The result is a masterpiece on the racetrack.


888, sold to the public in 1992, was almost identical to the version used by Raymond Roche in the Superbike championship.