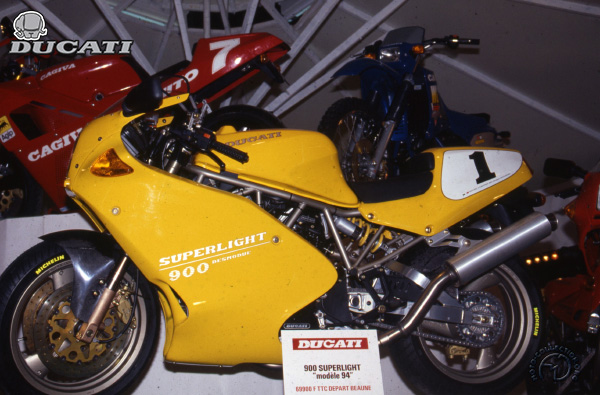 Light as a feather

Ducati's renown is due primarily to two important events in the firm's history. The first was Dr. Fabio Taglioni's adaption of the desmodromic valve actuation. The second was its successful race use of desmo-engined Ducati singles and twins; the desmo racers gave birth to the company's most famous model, the 750 Super Sport, soon followed by its larger-bore sibling, the 900 SS. It was little surprise then that Cagiva and Ducati created the new generation of 750 and 900 SS models to revive the company's fortunes in the 1990s.

Both the new 750 and 900 SS models won rave reviews, although they were quite different motorcycles. In 1992, Ducati unleashed a special limited-edition version of the 900 SS to be created in a short production run with only a small number of cycles destined for American shores. Thus was born the 900 SL, short for Superlight.

The Superlight featured several weight-saving components such as a vented dutch cover for the loud dry clutch and lighter-weight Marvic wheels. But the total weight reduction was a mere 5 lb - 409 versus 414 lb total. And magazines such as Cycle World also posted almost identical acceleration times between the two models. So in the end, what you got for the additional $1,300 over the 900 SS's price was not so much less weight and more power; it was Ducati exclusivity.

Tbe 900 Superlight was not so much super light or super fast as it was super exclusive.