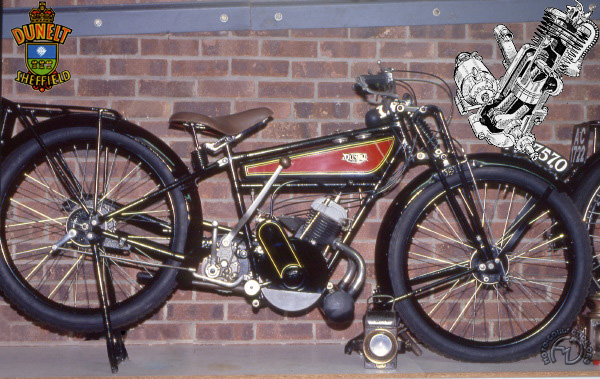 What a top hat entails

Founded in 1913 and out of business in 1956, Dunelt (the name was an abbreviation of DUNford & ELlioT) owed its reputation to its two-stroke singles with the original feature of a double-diameter piston. The lower pan of the piston, with a bigger bore, acted as a pump compressing the mixture in the crankcase, while the "upper floor" of the piston worked in a conventional manner opening and closing the transfer pons.

Ingenious but difficult to produce, the double-diameter cylinder had its little problems. The tall and heavy "top hat" piston de formed when it got hot and had to be assembled with plenty of clearance, which made it difficult to control.

This problem was never properly solved on the Dunelt 450cc single cylinder, built between 1919 and 1927. The 250 version, which came along in 1925, managed partly to sidestep this handicap, thanks to its smaller piston, and benefited more from the enhanced power output due to this design feature. The 250 reached more than 70 mph on the racetrack ridden by Â– among others Â– Ewald Kluge, the famous German ace who would demonstrate his talents with another leading light of the two-stroke world: DKW. Though it achieved fame with the success of its curious power plant, Dunelt never made a commercial success. From 1928, Dunelt abandoned the top hat two-stroke for conventional four-stroke units of 250, 350, 500 and 600cc.