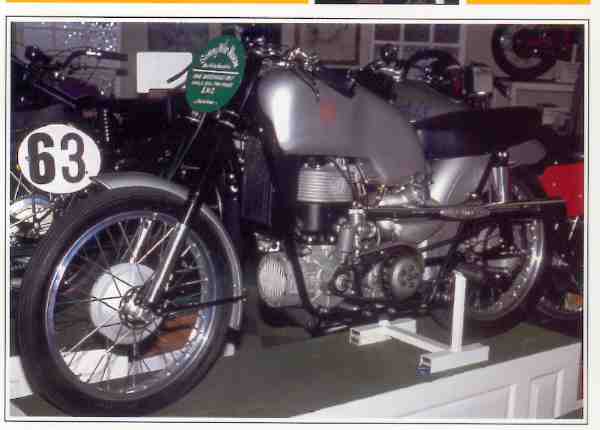 In 1947, Dr. Joseph Ehrlich, an unrivaled two-stroke expert, designed this highly sophisticated 350 with a double piston, two carburetors and a supercharger.

Not Really a Supercharger

Even though supercharged engines were barred from racing after WWII, the ingenious doctor attempted to qualify his 350 by arguing that it was not really supercharged. Whereas on four-stroke engines superchargers were fitted between the carburetor and intake valve, he argued, on this two-stroke engine, he had merely fitted an internal device that Â– as on pre-war DKWs Â– compressed the mixture in the crankcase. The EMC was not allowed to race in the 1948 TT. Its extremely short career was limited to a few races as a prototype with no rear suspension in 1947, of which the Hutchinson 100 was the highlight.

Three Pistons but Only One Spark Plug

This unique EMC had three cylinders but only one combustion chamber. The engine was effectively designed on the principle of a U-shaped double piston with a common combustion chamber (as on the Puch) with a third piston that had a short stroke (130x40mm) at the front of the engine that compressed the mixture admitted into the crankcase by the two big Amal TT carburetors. This compressed mixture was forced through three transfer ports into the rear cylinder, ignited and expelled through ports in the forward cylinder. These subterfuges allowed EMC to claim 45 hp, against the 30 hp developed by the then unbeatable AJS 7R.

Restored from near-derelict condition 43 years after it first raced, the sole EMC is now a prized exhibit in the Sammy Miller Museum.