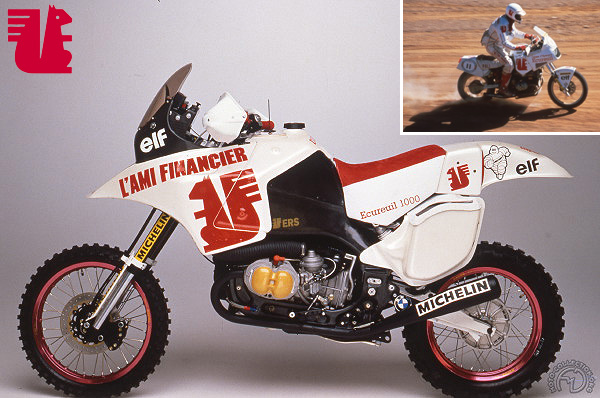 Conceived in 1986 by JoĂ«l Guilet on the initiative of the rider/journalist Pierre-Marie Poli, the Ecureuil ERS made news during the Paris-Dakar rallies of 1987-89. True, Team Ecureuil (named for a savings bank whose emblem is a squirrel) was playing a bold hand by testing its revolutionary construction techniques during the world's toughest rally.

The ingenious nature of the ERS's construction resided in its modular concept. It was made up of three quickly demountable elements Â– a monocoque body/chassis, the engine-transmission-rear wheel assembly and the front suspension. It only took six minutes to remove the engine and transmission; the ease with which the front suspension could be changed allowed the use of interchangeable modules with ideal suspension geometry for each stage of the event. It was even possible to vary the mounting point of the engine-transmission unit to achieve an ideal weight distribution and alter the wheelbase.

Like a modern Formula 1 car, the 1000ERS was built around a compact chassis monocoque in carbon-kevlar fiber. Weighing less than 14lbs., the monocoque housed the foam-filled aviation-type rubber fuel cell. Bolted below the monocoque were twin aluminum honeycomb cradles carrying the big twin-cylinder BMW engine/transmission unit. The wager almost paid off; in three years Ecureuil demonstrated the validity of its concept but it never achieved its ultimate aim of victory.

Racing is a tough school to learn in, and the Ecureuil bikes were pulled out of competition before their development was complete.