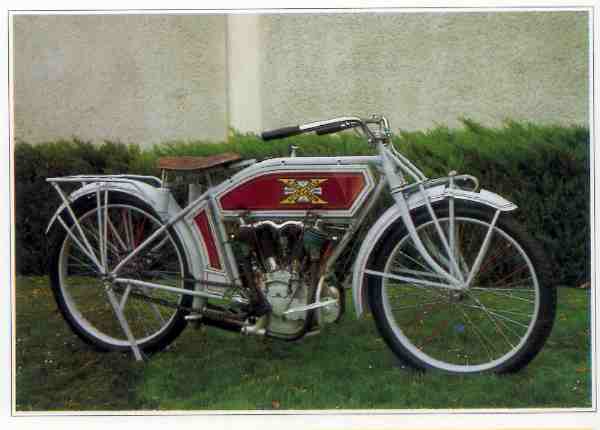 The American Excelsior firm (which had nothing to do with its British namesake) was founded in 1907 by Ignaz Schwinn, a well-known bicycle manufacturer from Chicago.

Schwinn rapidly became one of the biggest motorcycle manufacturers in the US with his range of Excelsior Autocycles and also with the four-cylinder Henderson marque that he bought in 1917. However, as competition became increasingly tough, Schwinn sensibly decided to revert exclusively to the production of bicycles. It was also still possible to buy a brand-new Excelsior bicycle in the early 1990s.

Right from the start, Excelsior found itself in contention with Indian, which had laid down the law on the US motorcycle market Â– and on the racetracks Â– since its foundation in 1901. Harley-Davidson had not yet acquired the fame that later singled it out as an American legend. The Excelsior 750 Â– with its famed F-head V-twin engine Â– rapidly became a redoubtable contestant because the firm enjoyed great commercial success and took more than its fair share of racing victories as well. The range of Excelsior Autocycles was a complex one in the days before WWI, going from 499cc singles right up to V-twins of 746 and 996cc. The first Excelsiors had leather belt drive, replaced in 1914 by a chain.

One of the greatest American motorcycle marques, along with Indian and Harley-Davidson, Excelsior is today considered one of the finest classics.