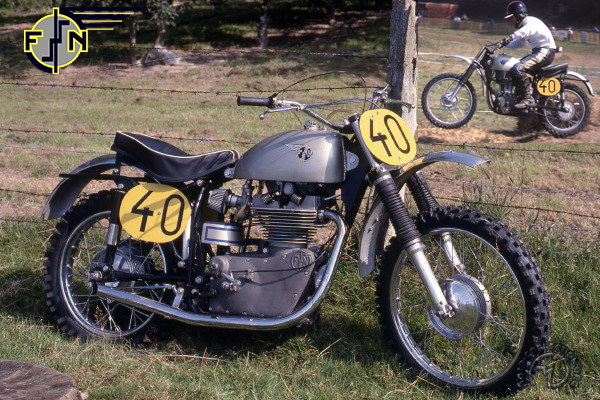 FN won a remarkable 395 victories in its motocross career. For a long time this sport, which dramatically grew in popularity in the postwar years, was dominated by Belgian bikes and riders. The most successful of the Belgian motorcycles was the FN 500 Grand Prix motocross which appeared at the end of 1947 and was still winning events in 1958. That year the Herstal factory, in financial difficulty, announced its retirement from competition to concentrate on lightweight machines.

Ten Years at the Top

Few machines won as many honors, as did the FN 500 during its long career which, on the international front alone, took the Championship of Europe three rimes Â– in 1952 with Victor Leloup, then in 1953 and 1954 with Auguste Minguels Â– a World Championship in 1958, ridden by Rene Baeten, and the French Championship in 1951, 1952, and 1953.

All Aluminum and Magnesium

Though it looked particularly massive, the engine of the FN was nevertheless extremely light thanks to extensive use of magnesium and aluminum; the bike weighed just under 300 lb. In its final version the FN500 was not only powerful Â– it developed 40hp @ 5000 rpm Â– but flexible, too, producing 20 hp at a mere 2000 rpm. Over the years the engine scarcely changed, though in 1948 the frame acquired trailing link front suspension.

The frames of the FN 500 motocross bikes were made to measure for each rider, so that the machine ridden by the loftily-built Minguels was noticeably higher than the rest.