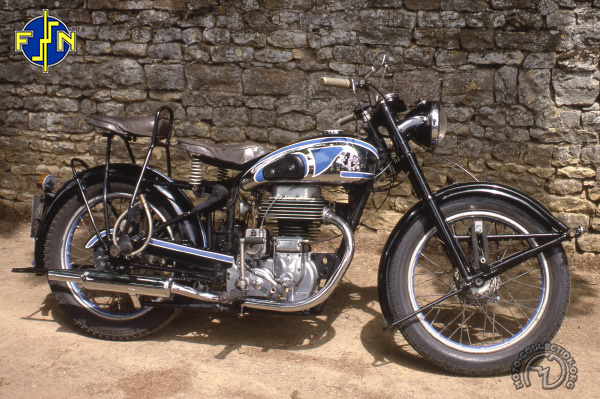 The best of the postwar FNs

In 1948, FN abandoned its trailing-link front suspension with spring dampers in favor of a new design of fork, still trailing-link but now with "Neiman" annular rubber springing. The design, which looked superficially like conventional telescopic forks, appeared less unconventional than before. The use of annular rubber springs was nothing new, for they had been used since 1935 by makers like Gillet-Herstal, Excelsior and DKW, but it was the first time they had been used in a trailing-link setup.

Back in 1947, FN had added a new 500 motocross mount to its range of overhead-valve 250s and 350s and side-valve 350 and 450 machines. The new ohc 500 took the Belgian Championship ridden by Victor Leloup. In 1950, FN launched a sports model, the 425. It inherited the generously finned "big head" designed for the motocross model (though the overhead-cam valve gear was replaced by pushrods and rockers).

Not everybody liked the new design of "elastic" fork, and to render the model salable in conservative markets like France, FN's Paris branch factory at Neuilly adapted their production for the French market to take conventional telescopic forks. This version was also offered in other export markets. Nevertheless, the rubber-sprung version that had been regarded with some suspicion when it was introduced is nowadays highly sought after by collectors. You can't please all of the people all of the time.