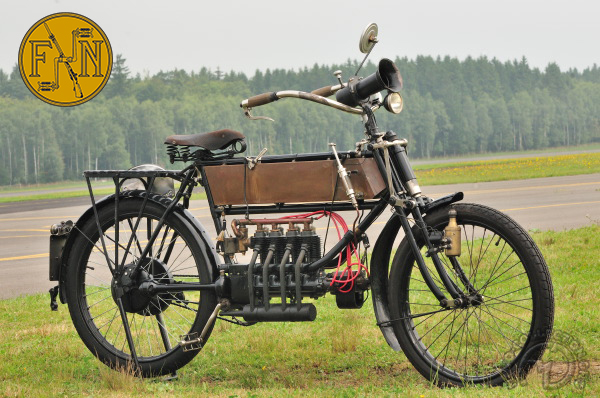 Motorcyclists have always been attracted by the regular running of four-cylinder engines, but this engine configuration has generally been complex and expensive to build. Even nowadays, four-cylinder bikes are the exception rather than the rule.

As Old as Motorcycling

The four-cylinder bike is, however, as old as motorcycling. The British engineer Colonel Holden (who also designed the world's first race track, Brooklands) produced a four-cylinder motorcycle in 1896. Then, in 1902, the French cyclebuilder Adolphe Clement built a 1500cc V4 racing bike. But it was not until 1904 that four-cylinder machines began to appear in significant numbers.

That year saw the Binks and Ewart-Hall from England, the Laurin & Klement from Czechoslovakia, and, most famous of all, the Belgian FN, made by a famed armaments factory at Herstal-lez-Liege. With a five-bearing crankshaft and shaft drive, the FN was particularly refined, even if such "accessories" as clutch and gearbox did not appear until 1912, and then only as options! Auxiliary pedaling gear was used to start the FN, and a back-pedaling brake enabled the rider to provide "light pedal assistance" on steep hills. Continually improved, the F was built in large numbers up to 1926, when a new "four" replaced it.

The FN "four" was widely exported and was used by both the Belgian and Russian armies in World War I. A similar bike to the one shown won the multicylinder class in the 1908 Isle of Man Tourist Trophy.