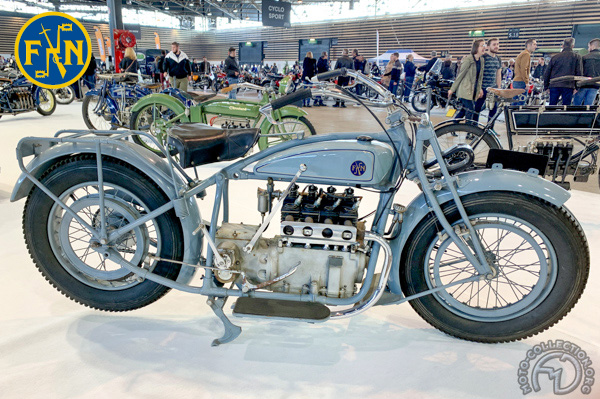 Last of the line

The career of the four-cylinder FN after WWI was extremely patchy. Not only was the 750T technically obsolete, but it was expensive to make, a combination that the bankers who had taken over the Fabrique Nationale Â– the previous shareholders had been German Â– were not prepared to tolerate. The MSO, which appeared in late summer 1923, was intended to correct this situation. While its cycle parts were not modern, they were at least in tune with current taste, and there had been an attempt to rein in engineering costs.

For instance, the traditional shaft transmission had been replaced by a chain, though the F-head engine remained unchanged. The MSO cost the equivalent of $900, twice the price of a reasonable medium-capacity motorcycle at that time.

It was a grand touring machine rather than a high-performance sports bike. The optional large-section balloon tires underlined the emphasis on comfort. But its fate was sealed when FN's 350cc M60 single-cylinder proved itself at once lighter, much more economical and virtually as fast. Despite fine performances in endurance trials like the Copenhagen-Breslau- Copenhagen and Liege-Clervaux-Liege events, sales of the MSO remained poor. The launch of the 500cc M67 in 1925 sounded the death-knell of the MSO, whose production was halted at the end of 1926 after just 1200 units had been made. The dynasty of FN four-cylinders had lasted 22 years, and their layout was to be copied at the end of the decade by a new generation of fours Â– but they weren't built by FN!

The M50 was the final four-cylinder built by FN. The cheaper modem singles outclassed it in terms of performance and economy.