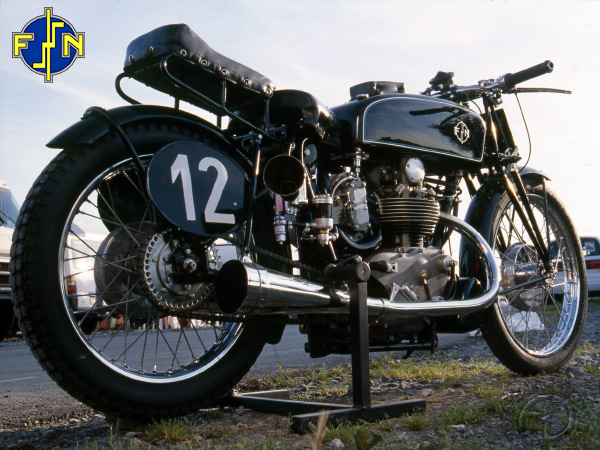 When people praise the latest technologies from Japan, it's worth reminding them that many of those ideas were born years ago in Europe: in Great Britain, France, Germany, Italy Â– and in Belgium.

A pioneer manufacturer of four-cylinders in 1904, FN stopped making multi-cylinders in 1926, but resumed in 1937 with the M12 flat-twin and this fabulous M14.

This V-twin, with a Roots-supercharged unit-construction engine in light alloy, succeeded the overhead-camshaft 500 single that was being outclassed in GPs. Its layout was unorthodox. Each cylinder/head unit had its own dedicated chain-driven camshaft. The M14 appeared at Spa-Francorchamps, ridden by René Milhoux, in July 1937, but broke its gearbox. It achieved its first success in October 1937 at Montlhéry, where Milhoux and Charlier established four world sidecar records, using a package carrier ballasted with sandbags. However, FN was becoming more involved in the newborn discipline of motocross. The M14 only appeared spasmodically in 1938 and 1939, placing in events such as the Coupes de la Meuse, Coupes de l'Armistice, 24-Hours of Schaerbeeck and Paris-Nice. It achieved its finest international result in 1939 in the European Grand Prix at Spa-Francorchamps, where Ginger Woods finished fourth at 88 mph.

The FN 500 twin in record-breaking guise