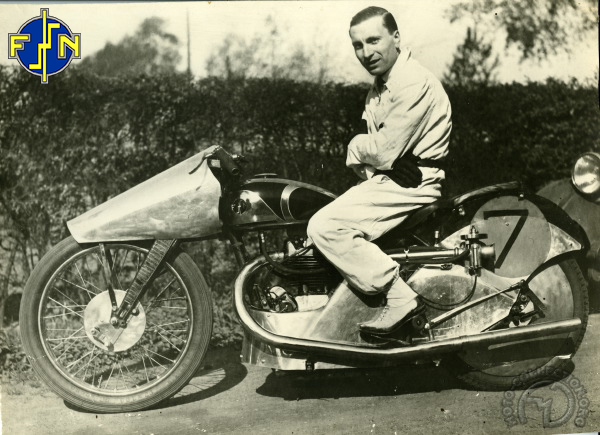 Marchant designed 350 and 500cc bikes, but they were not ready for the 1930 TT, where Handley raced (and won) for Rudge, nor for the German Grand Prix. In the following GP in Belgium, the FN broke down after a first lap covered at record speed.

After Handley broke 27 records at Montlhery in 1930 Ā– including a flying mile covered at 121.25 mph Ā– the repeated failures of the ohc racer finally proved too much for FN. When Marchant returned empty-handed from the 1931 TT, his contract was cancelled. The racing division was then entrusted to engineer Van Hourt, aided by rider René Milhoux. The shaft drive to the camshaft was replaced by a chain, and the frame was redesigned. After Milhoux and Tacheny set a series of records at Montlhéry in 1931, international victories came repeatedly in 1932, 1933 and 1934. FN, needled by the world speed record of 133.1 mph set by Ernst Henne on his 500 BMW, decided to respond. In 1934, Milhoux tested a special 500 fitted with a supercharger and aluminum streamlining Ā– including his helmet! Running on pure methanol, it developed 10 hp more than the Grand Prix FN at similar speeds. Milhoux recorded a speed of 139.2 mph, convincingly breaking Henne's record and confirming the blown FN 500 as the world's fastest single.

These rare illustrations show Rene Milhoux with the blown FN 500, its forks streamlined with tape, on the narrow Bonheiden road between Brussels and Antwerp in April 1934.