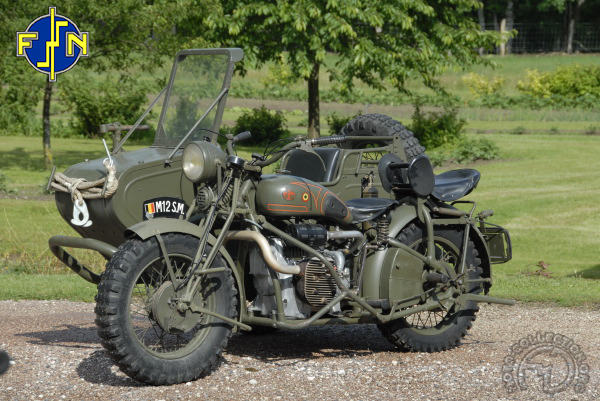 The Germans borrow from Belgium

Most famous for the 1904 introduction of the best of the first-generation four-cylinder motorbikes, FN had built nothing bigger than 750 cc until 1932, when it designed this impressive 992cc flat-twin. It was far in advance of anything in the same category from foreign makers, including the Germans. It boasted shaft drive, a reverse gear and, as an option, a driven sidecar wheel, which lacked a differential but could be clutched in or out at will.

Unveiled at the 1937 Brussels Show, the M12 was the principal inspiration for other military outfits, with powered sidecar wheels which would be built by such makers as Gnome & Rhone, BMW and ZĂĽndapp. The civilian version never went into production and only a thousand military M 12s were built before the factory was occupied by the Germans in 1940, then destroyed by Allied bombing. The German Wehrmacht, which had not finished developing its own bikes with powered sidecar wheels, appropriated the FN machines, some of which fought Â– in German colors Â– at Stalingrad.

After the War, the engine and front end of the M 12 formed the basis of the 12 T 3 tri-carrier Â– still intended for the military, who used it to carry men and munitions Â– which was the first machine to be built in the restored factory in 1946. Even with a 2200-lb. payload, it could still get up to 40 mph.

The rare FN M 12, a notable inspiration for similar machines from BMW and ZĂĽndapp