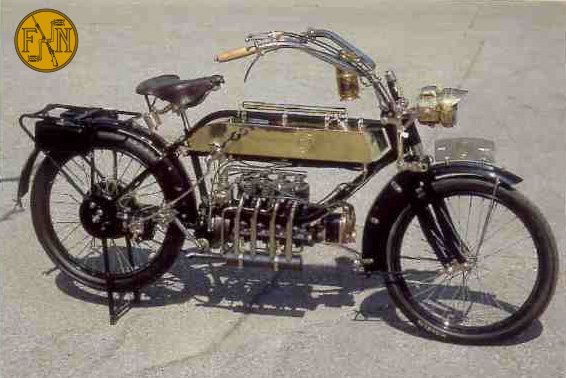 Engineer Paul Kelecom, formerly with Antoine, joined FN in 1905 and undertook the task of improving the four-cylinder machine designed by Clarus. In 1906, the displacement rose from 362cc (45x57mm) to 412cc (48x57mm) and the lubrication was improved.

The increased engine power gave FN sports pretensions, and in 1908, an FN-4 finished third in its class in the Tourist Trophy. The swept volume rose to 493cc in 1910 and, now a fully-developed design, the FN-4 was supplied to the Belgian and Russian Armies.

In 1912, the FN-4 was offered with the option of a two-speed gearbox and, above all, a clutch. These items had not been considered in the beginning and proved a little difficult to fit. The gearbox was mounted right in the middle of the drive shaft, close to the rear wheel; there was no provision for a kick-start, so run-and-jump starts were the order of the day. Finally, in 1913, the FN was fitted with a more highly developed carburetor and reinforced front forks. Its frame was curved to give a lower saddle height and the two-speed gearbox became a standard fitting. Compared with its rivals, it had the prestige of four cylinders, which gave astoundingly smooth running for the period, but was beginning to look slightly outdated with its automatic intake valves. Nevertheless, it was with such a machine that R. O. Clark broke several world records at Brooklands that year, averaging over 43 mph. For 1914, the FN was entirely redesigned as the 700T.

This is a rare example of the improved 1913 FN four, a model that was superseded by the new 700T the following year.