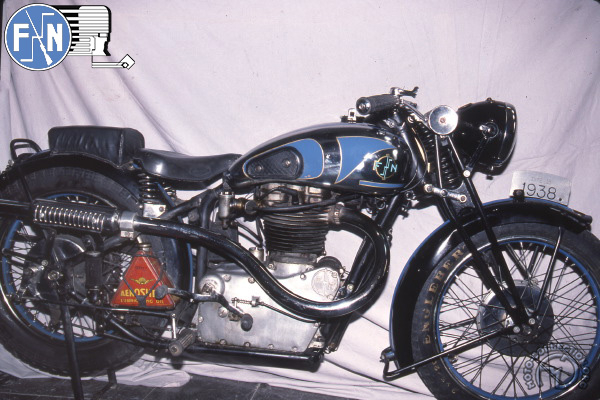 The popularity of motocross events, for which most of the entries were more or less transformed highway bikes, became so great in Belgium before WWII that the factories soon became interested in competing officially in this rapidly growing sport.

History in the Making

At first, FN took part with its 500cc M86, with which Jacques Ickx (later Belgium's most distinguished automotive historian and father of racing driver Jackie Ickx) enjoyed great success, but the machine was too heavy. So FN created its first dedicated motocross machine based on the new Series M11, which made extensive use of light alloys.

Exclusively built for competition use, the new M15 was available with either 500cc or 600cc engines, the latter being intended for sidecar use. Like the M11, the M15 had a fully-enclosed valve gear and all the roller bearings were mounted in bronze housings cast into the crankcase. The cylinders were cast in iron, aluminum or even magnesium. The cylinder heads were light-alloy castings. The elegant design of the M86's gas tank was retained, but the girder forks with compensating springs were replaced by a new fork with interchangeable links so that the fork angle could be varied to suit the different circuits. FN tested its first rear rubber-in-tension suspensions on the M15, but war broke out before this system could be put on the market. The M15 was frequently matched against tl1e rival Saroléa and Gillet marques in the off-road events that were so popular at the time, but it also took part in endurance trials.

This is the endurance version of the formidable FN 500, which won many fine victories in this most testing of disciplines.