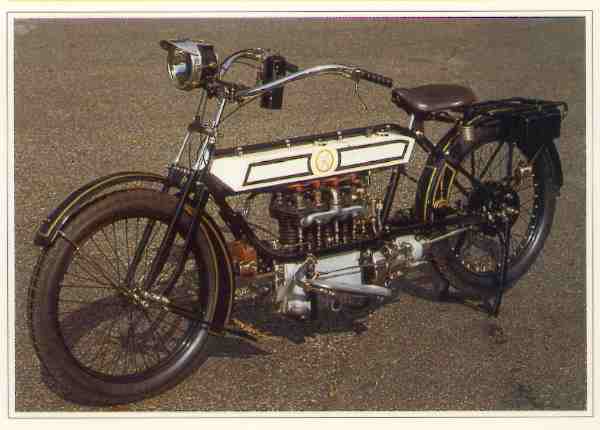 New look for the four-cylinder FN

The remarkable marque image generated by the first FN four-cylinder had to some extent begun to fade by 1910, and the 700T, which was launched late in 1913, tried to freshen up the legend.

Its engine was entirely new and displaced 750cc instead of 500. The intake valves were now mechanically operated, which had a direct benefit on performance, and the new T-head layout inspired the designation of the model (although why "700" instead of "750" wasn't explained).

Some corners had been cut to reduce the production costs: The crankshaft now ran in only two bearings instead of five. A definite improvement was the three-speed transmission, and a kick-start was also fitted. The redesigned frame had a longer wheelbase to accommodate the gearbox. This highly successful bike was well-received, despite its prohibitive price of 1350 Belgian francs, twice the cost of a good 500 single. But its career was rudely interrupted by WWI, since the Germans requisitioned the FN works during the hostilities. Production was halted between 1914 and 1918, but then continued until 1920 with some minor modifications. Total production is believed to have been 1257 units. A modernized evolution version of the 700T was marketed between 1921 and 1923 under the name (at last!) of 750T, with an F-head engine, girder forks and a new color scheme.

Though the 700T was very successful, its career was interrupted by WWI. It was notable for its long wheelbase, rendered necessary by the gearbox mounted behind the engine.