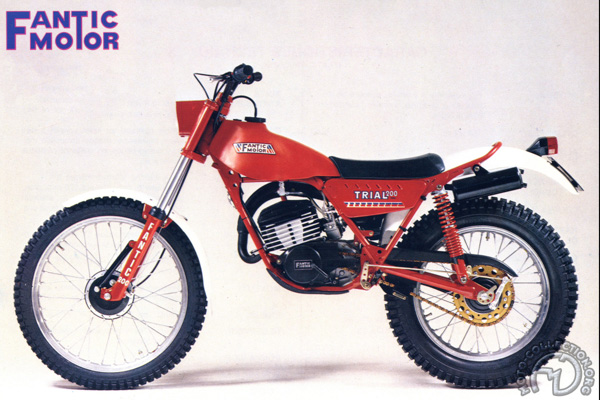 The first of the modern trials bikes

For many reasons, the Fantic Trial 200 can be regarded as a historic machine. It revolutionized trials riding and sowed the seeds of its revival.

For a long time, trials riding- a subtle sport in which skill is everything had failed to generate any significant technological advance. Trials riders had admittedly moved on from the 500cc British big singles on which the sport had been founded to the

Spanish 350cc two-strokes (Bultaco, Ossa, Montesa) that had dominated the discipline for some fifteen years.

Then Fantic Motor, an Italian manufacturer specializing in enduro machines, overturned the established order. Having brought out a 125cc machine in 1978, Fantic followed it the next year with a bored-out version, the Fantic Trial 200, a tiny machine with the highly unusual displacement of 160cc for that era. It weighed 192 lb, was extremely compact and had a responsive engine that favored high revolutions over torque. The Fantic 200 brought a new vision of a lively trials machine that was very highy evolved, modem and competitive. Three years later, Fantic brought out the 240 Professional (211 cc), which enjoyed enormous success. It established the Barzago factory as an institution in trials circles. Every modern trials bike owes something to the iconoclastic little Fantic 200.

The Fantic 200 Trial "Type 350" actually displaced I60cc, but by abandoning the traditional 350cc capacity for trials machines. It forecast the modern trend in this specialized sport.