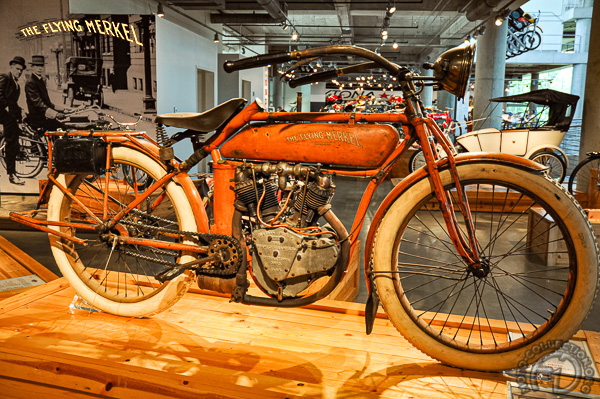 Joe Merkel was very much his own man when it came to the concept of a motorcycle, and proved it when he launched his new touring model around 1910. This 1000cc V-twin offered amateur enthusiasts power, elegance and comfort. Also, the many racing successes achieved on the board tracks by Â– among others Â– ace rider Maldwyn E. Jones ensured excellent publicity. The Merkel was technically advanced, and the 1914 models even featured a spring starting system, which was both disastrous and dangerous!

End of the Road

But the decline in the US market, combined with technical problems (because of WWI, Merkel could no longer obtain special German ball-bearings for the crankshaft, camshafts and magneto), hastened the end of the marque, which was absorbed by Indian in 1915 and vanished in 1922.

Merkel was one of the first manufacturers to consider that motorcycle suspension should not depend solely on the air in the tires and the springs in the saddle. On the new model, the rear suspension consisted of a cantilever assembly with a single spring beneath the saddle. The front suspension, one of the first US telescopic units, used twin-coil springs contained in a leather sheath. Such advanced concepts fully justified the glamorous marque name "Flying Merkel." The 1913 owner's manual even counseled good riding etiquette Â– "Never ride with the exhaust cut-out open. It is a very bad habit since the noise is most unpleasant for the public and frightens horses. Never forget that you must always remain a gentleman."

With its bright-orange color scheme, the Flying Merkel was instantly recognizable, whether or not its rider bad the exhaust cut-out open!