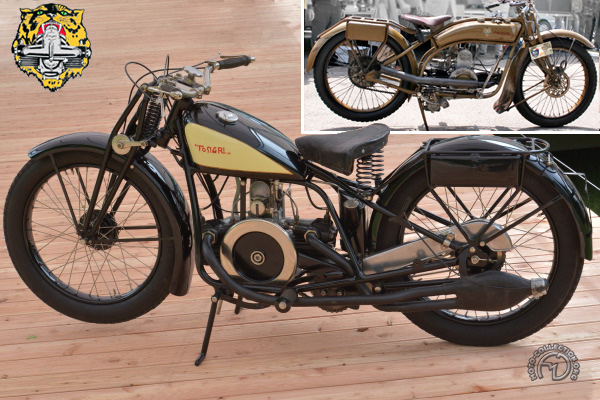 Throughout history, fashion has dictated what makes motorcycles appealing. The success of Douglas inspired a number of constructors to venture into the "longways" flat-twin since the first decade of the century: BMW, D-Rad and Victoria in Germany, Harley-Davidson in the USA, ABC and Brough in England, Itar in Czechoslovakia and Magnat-Debon in France.

Italy was early to follow the longitudinal-twin trend, for as early as 1910 Fontana and Grignani went into partnership in Turin to build a motorcycle of th is type.

The Three Lives of Fongri

The Fongri was a belt-driven 500 with an ownmake forks, two-speed transmission and carburetor. Enthusiastic press reports were not enough to ensure the survival of this limited production model, especially in those troubled times. However, the Fongri marque surfaced again in 1921, this time with a factory near Milan; oddly, Fontana and Grignani didn't seem to be part of the organization. Once again, forks, transmission and carburetor were made in-house, and the practical aspect of the design had been carefully considered. The primary and secondary drive chains were enclosed, and the hubs had knock-out spindles to facilitate the removal of the wheels. But this company fared no better than the first, and production was halted in 1922. It was resumed again in Turin - in 1924 under the aegis of Eugenio Grignani and his brother, with an evolution "Sport Lusso" model, plus a racing version with a disc front brake. But it was not sufficient to relaunch the career of a model that was already showing its age, and no more was heard of Fongri after 1926.

The Fongri was influenced by the original Douglas flat-twin, though the design of its double-cradle frame reveals the Italian flair for elegance.