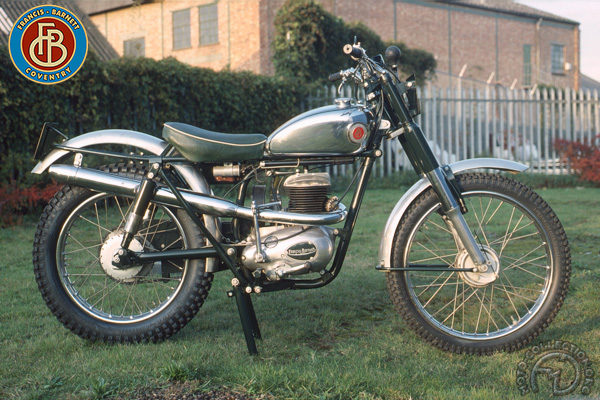 End of an era

Founded in Coventry in 1919, Francis-Barnett established a solid reputation by equipping its motorcycles with the "Built like a Bridge" triangulated space frame invented by its founder, Captain Gordon Ingoldsby Francis. The marque caused a sensation in 1933 with the Cruiser touring bike, whose lower engine and transmission were fully encased in steel fairings. In 1947 the marque was acquired by the AMC group and continued production of the 250cc two-stroke single that had made the "Fanny-B" a household name.

In the 1950s, many British manufacturers used the Villiers engine, a proprietary two-stroke that was as simple as it was indestructible. The Francis-Barnett Trials,

introduced in 1952 in 125 and 137cc forms, was one of the best exponents of this formula. In 1958 the Trials 83 appeared, directly derived from the works competition version. It took two gold medals in the 1958 International Six Days' Trial in Austria.

Invasion by the Spanish Armada

Trials Â– a form of off-road competition that emphasizes rider skill and regularity rather than speed Â– was a British invention. For years it was dominated by the four-stroke machines, but two-strokes began their steady progress to the top in the 1960s. And when crisis hit the British industry in the micl-1960s, Spanish marques, headed by Bultaco, took full advantage of the situation to dominate the trials scene.

Unostentatiously efficient, the Francis-Barnett Trials was powered by the two-stroke engine produced by the parent AMC group.