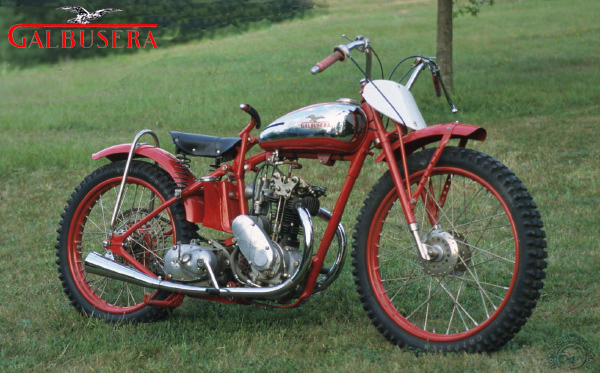 In 1934, Plinio Galbusera began building machines fitted with British power units. The engines came from Sturmey-Archer and especially Rudge (efficiently represented in Italy by the Miller company). The gearboxes were Burman or Sturmey units and the whole was designed (and often raced) by Adolfo Mannara. Galbusera production was always small.

End of the line

Just before WWII, the range included 350 and 500 side-valve singles with MM motors. But in 1940, it shrank to a handful of three-wheeled utility vehicles with crude power units, either big-singles or little four-cylinders of automobile origins. Then, until the end of 1955, little Sachs-engined machines were built. All these crude machines were a poor reflection of the passion that drove Plinio Galbusera to squander the little money that building motorcycles had brought him.

The great legacy left to motorcycling history by Galbusera consists of the legendary 250cc V-4 and 500cc V-8 bikes shown at the Milan Salon in 1938. These two machines Â– which sadly have not survived Â– had supercharged two-stroke engines with longitudinal crankshafts. On the 500, the gearbox was mounted transversely between what could be called the front V-4 and the back V-4 and driven by bevel gearing from these engines, which rotated in opposite directions. This highly original layout had been designed by an Egyptian named Marama Toyo, who lived at Trieste and was killed after WWII riding in a speedway race.

In their maker's quest for perfection, the first Galbuseras were f-itted with the best proprietary engine available, the radial-valve Rudge single.