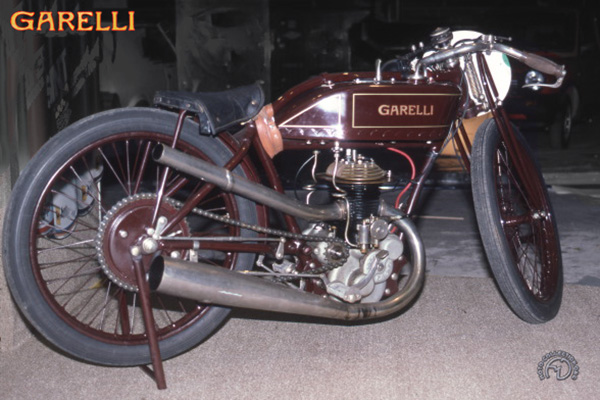 "Today, January 10, 1924, I saw the engineer Garelli arrive at the summit of the Mont Cenis pass on a Garelli lightweight motorcycle". This affidavit, signed by Captain C. Montra, occupies the first place in the Golden Book of the Garelli factory, founded in Milan in 1919 and renowned as the most brilliant Italian exponent of the two-stroke engine.

Up to 1926, the entire production of the marque was based on a single patent, taken out in 1912 by Adalberto Garelli. Garelli's first experimental motorcycle of this type was a 350 built in 1913 and capable of 50 mph. It won the 536-mile North-South Trial from Milan to Naples at an average speed of nearly 24 mph, finishing nine minutes ahead of a 500cc Sunbeam. In 1922, Garellis finished 1- 2-3 in the Grand Prix of Strasburg, and the marque also won the Monza GP at 62.8 mph.

Star of the Racing Scene

The star of the Italian racing scene in 1923, the Garelli was ridden by the greatest names of the day, like Nuvolari and Varzi, who both went on to even greater success in automobile racing. At Monza, in 1923, Garelli notched 77 world records. But in 1924, Garelli announced that, since certain marques had been claiming victories in non-existent races, his factory was withdrawing from racing. However, Garelli was back in 1926 for one last record-breaking fling with a twin-exhaust version of the 350. It set 138 world records.

This 1924 Garelli 350 was used for road racing, track racing and record breaking.